I’m loving dressing Allie in cute dresses now that the weather is warm.

Allie’s baptism is tomorrow. Its only about six months later than we wanted to have it. But it works out. We wanted to have it when she was around a month old, but that would have been in December and I think it would have been hard coordinating a family event with a new baby in the cold weather. So now we have an older baby and the weather is nice!

Doug and I have spent the week cleaning and we’re finally done. There were things we didn’t quite finish, but all in all our house is the cleanest its been maybe since we moved in.

After the baptism our family is coming for lunch. There will be about 20 family members crammed into our little townhouse. It will be fun. I just hope I’m making enough food.

Does this look like enough? Our refrigerator is never this full! 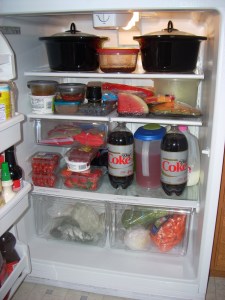 Allie has been eating solids for awhile now, but its a slow process of food introductions. We started with rice cereal and followed that up with sweet potatoes, then squash and then carrots. Yesterday Allie tried bananas for the first time. As far as we can tell, she’s liked everything she’s tried, though we couldn’t tell right away with the bananas. She seems to like squash the best.

She’s also working on mastering the cup. She likes to play with it and seems to know what to do. She grabs it and puts the spout in her mouth. But what she hasn’t realized yet is that she needs to tilt it to get anything to come out. It took her awhile to know that juice comes out! She’s really eager though and I know that once we get a little more consistent with giving her the cup, she’ll figure it out.

Allie helped us with the grocery shopping yesterday. While she doesn’t sit up straight just yet, she liked riding in the shopping cart just fine! 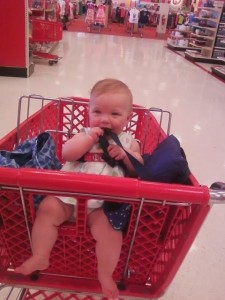 So far in May, I’ve run 26.2 miles! I wonder if I’ll ever tackle the 26.2 miles all in one day? That is my ultimate goal, but I have no idea when it becomes a realistic one.

Running is getting better every day, though my shin splints are still present. Apparently taking three weeks off by itself wasn’t enough. I’m working on stretching and strengthening my legs though and it is getting better.

I had two goals before starting training for my Aug. 21 half marathon and I surprisingly met them both last week. I wanted to get my long run up to 6 miles and run between 12 and 15 miles in one week. I surprised myself with a 6-mile long run on Saturday, which pushed my mileage for the week to 12.

But I’m not going to rush into half marathon training. Instead I think I’ll take another couple weeks to build up my mileage a little more, not to mention continue on my quest to strengthen my legs. My new orthotics have helped, but they aren’t a cure all, so I’m stepping up my strengthening efforts.

I am feeling a lot better about my running now than I was back in March when I decided I shouldn’t run the Madison half. As much as it stunk to make that decision, I know it was the right one, and it paid off. There is no doubt in my mind that I will be running the Madison Mini-Marathon on Aug. 21, followed a month later with the Fox Cities half marathon. 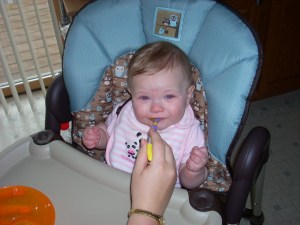 Allie is really interested in food now. She’s a bit more interested in our food than in her bottle. She eats really well and I think she was really surprised and please to try something new. We’re pleased with the results!

Allie is so mobile… backwards! She’ll keep going backwards, until she ends up under something…

On a side note, its fun to see Monk and Allie interact. Its obvious Monk loves her baby sister!

This morning I did something I never thought I could do: I woke up at 5 a.m. and went to the gym. It was weird being on a treadmill before the sun came up, but it was certainly nice having my workout done at 6:30! I liked it, but it will require going to bed early every night, which is hard for a multitude of reasons.

I’m delighted to report that I’m up to 12 miles for the month of May, so I’m smashing my April mileage, which was a robust 6.8 miles. And if I can make this morning runner gig stick, I should be able to keep running consistently.

A problem with getting up early to run is I’ll have to get up even earlier if I want to run more than 3 miles. The other problem is that because of working out so early, I’m starving right now and I need to ration my snacks to make them last until lunch!

I’m happy that running seems to be going really well now. I feel the best I’ve felt in a month and I also have my new custom orthotics. I got them last week and its taken some time to break them in, but they’re really helping. Its interesting to wear my new orthotics and then my old ones because they’re so different. My feet changed a lot in the two years since I got my first pair.

I’ve been wondering if I’d still be running the half marathon on May 30 if I’d gotten my new orthotics sooner. But it does no good to wonder what might have been! Enough about the new orthotics. I’m moving on to my training goals. I’m spending May just building up to a long run around 5 to 6 miles and weekly mileage of 12 to 15 miles. It seems low comparing to what I used to run way back when, but it would be quite an improvement for me right now. Then in June I’ll start training again. The Madison Mini-Marathon is Aug. 21, and there’s no way I’m not running it.

Life as we know it
Blog at WordPress.com.