On Sunday we went out for a family lunch at Applebee’s. Allie hadn’t napped yet despite being in the crib for one hour. And she was a little cranky before we left, so we were afraid this lunch would be a complete disaster. But it was so much fun! She was so cute talking to people around us and “reading” the menus. She tried chicken fingers for the first time and loved them, though we did take most of them home and finished them for dinner.

We wanted to go to the play place at the mall after, but Allie’s lack of a nap caught up with her. We took her home where she took a two-hour nap and Mama and Dada got a nice afternoon break. Maybe we’ll go to the mall next weekend.

Allie is definitely getting to the age where she has a lot of energy and gets bored when we stay home all weekend. I’m eagerly awaiting spring when it will be much easier to get out of the house! 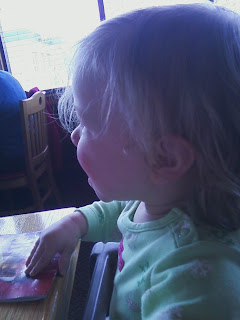 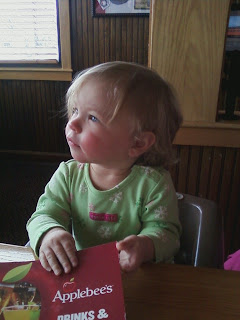 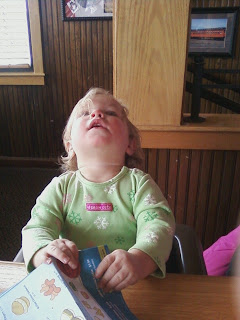 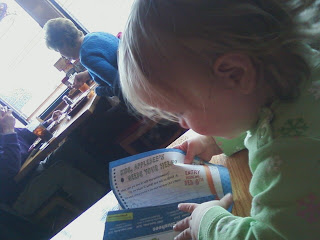 Dada is sick this weekend, so Mama and Allie went on a grocery shopping adventure so Dada wouldn’t have to. 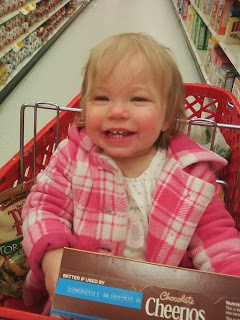 Allie loved the sights and sounds and all the groceries she got to play with. 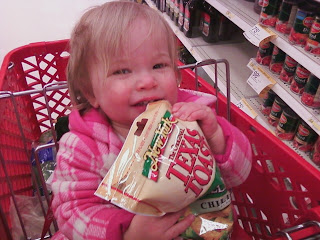 She was very well behaved as long as she had something to occupy her attention. Since we were buying all the stuff, I saw no harm in letting her play with it. That was better than her putting her mouth on the cart! 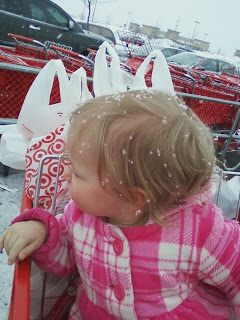 And when we were done we walked (well, she rode) out to the car in the fluffy snow flakes. This picture doesn’t do justice to her delight! She loved having the snow flakes fall on her face.

It was a fun, but exhausting adventure! We’ve been getting better at eating family dinners, but Allie was tired and cranky from her adventure. So we fed her early and she was in bed before 7! She even fell asleep a bit faster than she normally does. I can’t wait for the weather to get nicer so we can go out on more adventures on the weekends.

In the last 7 weeks I have lost 19.8 pounds and I couldn’t be more thrilled.

But I really really hate dieting.

When I lost weight three years ago by counting carbs, it didn’t feel like a diet. This time it does. I have the guilt that goes with a diet as well as the yearning for more food.

Thats not to say I’m going to quit the diet, however. After awhile last time I could let myself go for a day and then hop back on the diet train. I’m not that far yet.

I think the reason why I’m still on this diet is the fact that we can still eat dessert. Doug and I buy the weight watchers ice cream bars and have one, sometimes two, almost every night.

One of many secrets to successful weight loss, I’ve found, is to not deprive yourself. That is just a setup for failure. Thats why I’m glad we can still have ice cream.

Allie was in rare form tonight when we decided to bring Elmo out for a spin.

Goodbye 200s! It hasn’t been nice knowing you and I hope we NEVER meet again!

One of my online friends today welcomed me to “one”derland.

I finally checked and it was indeed early June 2009 when I crossed the 200-pound mark, about halfway through my pregnancy. The weight just kept on coming and then after giving birth, I was so sure it would away as quickly as I packed it on. It didn’t then, but now it has.

There are only 22 pounds between where I am now and my pre-pregnancy weight. If I keep losing at my current rate, I could be there in less than three months. Of course, surely the weight loss will slow. But it hasn’t yet.

Only 57 pounds to my ultimate goal of 140. That 57 seems intimidating. But considering less than two months ago that number was 77, I’m not nearly as intimidated!

Well, obviously this is late, but I need to say it. We were THRILLED when the Packers won the Super Bowl. We still can rouse Allie into a chant of “Go Pack Go!” and “touchdown!” Its lots of fun.

Here we are all dressed up in our Packers gear on Super Bowl Sunday. Allie even got a cool sweatshirt! We still haven’t gotten our Super Bowl champion shirts yet, but we will.

I heard not long ago that this blog has some young fans in Missouri. My nephews Carson and Cole are faithful readers! Or at least I hope you still are since I didn’t post much for awhile. Carson and Cole are also Packers fans as well (well I know Carson is, are you too Cole?) and they love Wisconsin. So I just wanted to send a big “HI” to you boys and send a virtual hug! I hope you’re having a good week and I hope to see you soon!

Allie is more and more interested in eating with a spoon. Its not always very pretty, but she gets the idea.

Sometimes she can even put the spoon in the bowl and get her oatmeal herself. But most of the time we put the cereal on the spoon and Allie plays with it a bit before she actually eats it. So we usually do this just with oatmeal or yogurt, something thick enough to not fall off and make an even bigger mess.

She also likes to be silly with the spoon.

Now if only we could get her to use eat off the plate instead of just dumping the food onto the table!

Its not piriformis. At least my chiropractor doesn’t think so. He thinks its just still my lovely SI joint that has flared up because I went straight from the treadmill to the outside crazy hard runs!

Duh! I completely managed to forget the rule about transitioning from the treadmill to outside! You’re supposed to start small and alternate between outside and the TM for awhile to get your body used to the terrain. Geez. I went straight to a 4-mile hard run and ran outside 4 times in a row! No wonder my body is breaking.

It didn’t even occur to me until I was telling him about it. My very first outdoor run was about 2 and a half weeks ago and after that one my SI just felt out of whack. It progressed to the point where I could barely walk after a run! I had an adjustment last week and ran the next day. While the adjustment did help a bit, I just got all out of alignment again.

Pretty frustrating, as I was doing so well with the SI. But I’m glad at least its a recurrence of the same injury and not something new.

My plan is the same. I’ll take the rest of the week off or perhaps hit the elliptical this weekend. I’m using ice and ibuprofin. I should start doing my exercises again, but I don’t know if I will. And when I do start running again, hopefully next week, I’ll be more gradual about it. I’m back to more frequent adjustments for right now to get this back under control. Hopefully in a week or two I’ll be all aligned and running outside without losing much of my training.

I’ve been talking about running another half for two years now. I’m not giving up!

Another day, another possible injury issue. I’m so tired of finishing one injury, just to be stricken by another.

This time, I think its my piriformis.

Going on, the piriformis runs right by the sciatic nerve, the largest nerve in the body. Apparently in piriformis syndrome, one irritates the other and you get a literal “pain in the butt.”

But then again, it seems sciatic has almost the same definition. Either way, I’ve got a pain in the butt, which is causing pain in my back and hip after I run. It hurts at the beginning of a run, goes away, and then I can barely walk after a run. So now I’m self-imposing rest… AGAIN. I’m resting, taking some ibuprofin, icing and seeing the chiropractor tonight. I’m also going to see the sports medicine doctor in two weeks if necessary… maybe PT.

I’m disappointed, obviously. I had such a good week in my first week of half marathon training, but the pain was bothering me last week too. Whatever gets hurt is throwing my SI back out of whack and the other pains I’m getting are the results of walking funny when it all hurts. I just hope the chiropractor can help me because its much easier to get in there than it is to the physical therapy clinic.

Hopefully I can take a week or two now to get this fixed and not lose much training. It helps that my long run is already 5.5 miles. I’d prefer to get to at least 12 miles for a long run before the race, but I could probably do 10. Better to deal with this now than later once I’m further into training and I’ve paid for the race. I’m still hoping to actually register for the race before the fees go up March 15.

Whenever we bring Allie into the living room, its a race to see who can make it to the off-limits places or things first. On Saturday, Allie made it to the stairs before Dada could close the gate.

He decided to experiment and see how far she would climb. Previously, she’d only climbed up to about the third step before looking around wondering how she’d gotten there and, more importantly, how to get down.

Saturday, however, she ended up climbing all the way to the top! Don’t worry, thats Dada behind her to make sure she wouldn’t fall. Now we just need to make sure we don’t encourage that kind of behavior again.

Life as we know it
Blog at WordPress.com.